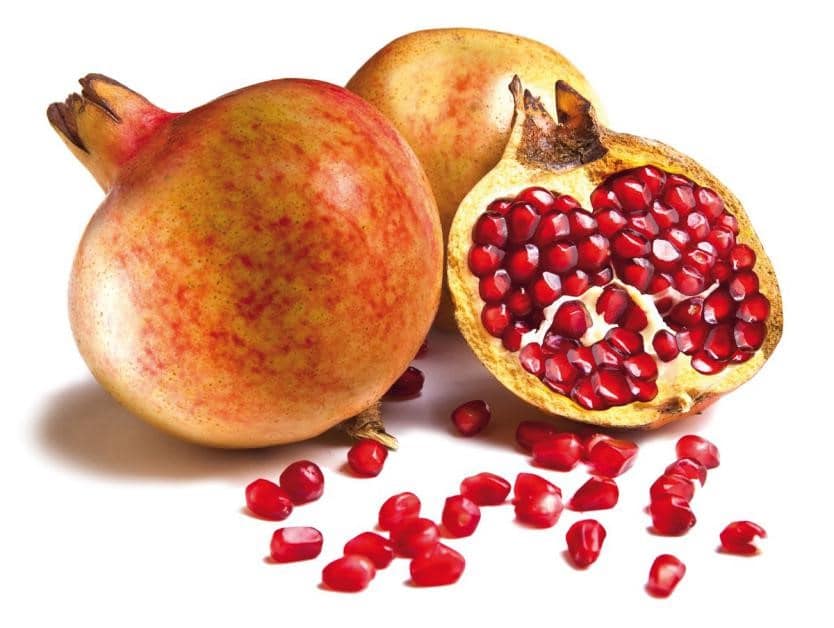 The most important characteristics of the Mollar de Elche pomegranate are as follows:

– Maturing between October and November.

– It is more productive and of better quality and higher calibre than the Valencian group pomegranates, which rank second in Spanish production.

The “Mollar de Elche” pomegranate variety is undoubtedly the most cultivated in Spain, and is the variety for which Spain is known internationally. Mollar de Elche fruits have two main advantages:

(I) an intense sweetness and (II) a very soft woody aril part (the edible part). However, it also has disadvantages: (I) a fairly weak colour, which worsens significantly after the thermal treatment of the juices, and (II) quite a simple sensory profile, dominated by sweetness and with fruity, aromatic notes that are generally not intense. On the other hand, we can state that the fruit of other non-indigenous varieties, such as Wonderful, are complementary to those of the Mollar de Elche variety.

This complementary nature is based on the fact that Wonderful pomegranates have a complex sensory profile and a very strong claret red colour. However, it also has clear disadvantages, which are that it is extremely acidic and the woody part of its arils is very hard and persistent (Vázquez-Araújo et al., 2014).

One of the latest products to be developed by the “CSA” group for the company “Antioxidantes Naturales del Mediterráneo” is a pomegranate concentrate based on a fusion of the Mollar de Elche and Wonderful varieties.

This combination has led to the obtaining of a product called Granatum Plus Pomegranate Fusion Concentrate, which includes the advantages of both varieties and that neutralises their sensory disadvantages and includes a high content of punicalagins – 232 mg of punicalagin in the recommended daily dose (30 mL of the product).

CONCLUSIONS OF THE RESEARCH WORK OF MIGUEL HERNÁNDEZ UNIVERSITY

One of the latest research studies was focused on the comparison of the content of total punicalagins and polyphenols in a total of 50 commercial products based on pomegranates (sold in the European Union, including Spain).

The products studied were divided into two large groups: (I) capsules, ampoules and extracts, and (II) juices of direct extraction, juices from concentrates and concentrates.

For group two the values ranged from no detection of punicalagins to 10.4 mg of punicalagin per gram of product. The results obtained after the analysis showed that the “Granatum Plus” products were of higher quality, in terms of the composition of the aforementioned compound (α- and β-punicalagin).

The pomegranate extract capsules and the Granatum Plus Pomegranate Fusion Concentrate were the products in which high contents of punicalagin were found (308 and 7.76 mg of punicalagin per gram of product).

Based on the research studies carried out on over 50 products during the period from October 2016 to April 2017 we can conclude that the Granatum Plus products contain optimum values of punicalagin A+B, as well as the highest values in the organoleptic tests. It has also been determined that the value for money score of its products is much higher than most of the products analysed.

Regarding the products described as eco-friendly, it has been determined that they do not have a higher content of bioactive components than the conventional Granatum Plus products.

In view of the above, we can conclude that the juices, concentrates and extracts of Granada Granatum Plus fully comply with the requirements of functional food, meeting the needs of the most demanding consumer.